Jack Kagan was born in 1929 to a Jewish family in Novogródek, a town which at that time was in eastern Poland.

In 1939, following the Nazi-Soviet invasion of Poland Jack’s town was occupied, first by the Soviets and then, from 1941, by the Nazis.

Following the Nazi occupation, Jack was imprisoned in a ghetto, before being sent to a forced labour camp in 1942.

It was in the forced labour camp that Jack heard about the partisans . Determined to join them, Jack helped to coordinate digging a tunnel out of the camp through which he and the other prisoners escaped.

After escaping, Jack joined the resistance group the Bielski partisans, and survived the rest of the war in hiding in the Naliboki forest.

After the war, Jack settled in Britain, married and had three children. He died in 2016. 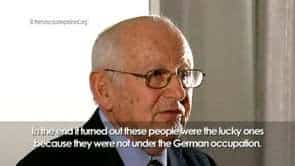