Ruth Michaelis (later Barnett) was born in 1935 in Berlin, Germany. Ruth’s father, Robert, was Jewish, and her mother, Louise, was Christian. Ruth had one brother, Martin, who was three years older.

As a result of the Nazis’ increasing antisemitic persecution, in 1939 Ruth and her older brother were sent on the Kindertransport to England.

Both of Ruth’s parents survived the war. Ruth’s father, Robert, escaped Nazi Germany and fled to Shanghai, where he remained until the end of the war. Ruth’s mother survived in hiding in Germany.

In this video, Ruth tells her story. 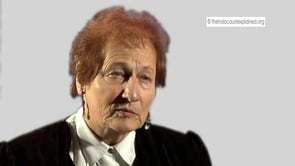